In 1975, there were no Latino fraternities in existence in the United States. The Greek-letter organizations of the time primarily catered to Anglo and African-American students and graduates. Lambda’s founders, as men of vision, realized there was a need to unite the Latino students, develop their leadership skills, impart upon them the value of an education, and instill in them a commitment to their community and culture. The traditional student club would not suffice to accomplish such lofty goals. Hence, Latino unity and brotherhood would be achieved through a long recognized institution – the fraternity. This newest addition to the Greek system would be the first in the nation, by identity and by name: Lambda Theta Phi Latin Fraternity, Incorporated.

The ideals of this brotherhood are the following: Academic Excellence; Brotherhood; Leadership; Latino Unity; Service. On a daily basis, our brothers live up to these ideals, as set forth by fourteen young Latino men decades ago.

At the undergraduate level, our brothers are active within the Fraternity and in other student organizations. Our brothers perform community service, promote our culture by sponsoring events which highlight and celebrate our heritage, participate in educational workshops, and enjoy many social programs. As a result of their active participation in every aspect of college life, our undergraduates are developing their organizational, communication, and leadership skills, all while pursuing the coveted diploma. Our younger Lambdas are receiving the training and competence to serve as the future leaders of our brotherhood, community, and nation.

At the professional level, among our ranks you will find attorneys, doctors, and engineers. Our brothers are shaping young minds as educators and as dedicated fathers. The men in brown and white are defending this country at home and abroad in the area of law enforcement and in the armed forces. We are strengthening our country’s economy as entrepreneurs. Our brothers are teaching leadership as coaches, mentors, and community activists. The Lambdas are affecting policy and change as elected officials serving on City Councils, Boards of Education, U.S. House of Representatives, and U.S. Senate. In short, Lambdas are contributing and excelling in every facet of human endeavor.

Since our founding, Lambda Theta Phi has established chapters in every region of the country at both the undergraduate and professional levels. Our brotherhood continues to provide the necessary skills and resources for the advancement and empowerment of our people and for the betterment of this nation.

Our illustrious history is not only our past but our guiding light to the future. As the first, we overcame many obstacles. Not having much guidance in our formative stages, we persevered and became stronger. Lambda is the product of vision, strength, and unity. Our history serves as a legacy and testament to our accomplishments and greatness.


In response to the title, José Quiles has stated, "I always felt I was a father of the Fraternity in the sense of being a technical resource, because a lot of the internal development was carried out by the Founding Fathers themselves."  Founding Father Agustín García concurs: "These two men fathered the brothers.  A father teaches and these two men had taught."  The creation of Lambda Theta Phi was a learning process, and the two Fraternal Fathers were instrumental.

With numerous decisions to be made and strategies outlined, the brothers received guidance from two members of the Kean College faculty/administration. Specifically, Dr. Cayetano J. Socarrás, who passed away on January 24, 1994 and José Quiles, recognized within the brotherhood as the Fraternal Fathers of Lambda Theta Phi. Each of these men provided support, mentorship, and guidance to the Founding Fathers and have continued to do so as the Fraternity has developed. Their devotion to the ideals and brothers of Lambda extends far beyond what can be captured in a website.
Cayetano Socarrás and José Quiles are the Fraternal Fathers of Lambda Theta Phi. The commitment and dedication they have given the Fraternity has earned them the love and admiration of all brothers.
From September to November of 1975, a group of students, from which would eventually emerge the Founding Fathers of Lambda Theta Phi, met to find the solution to uniting the different Latino groups on campus.

These meetings were initiated by Founding Father García, who had already spearheaded a important breakthrough for Latino students by becoming the first Latino elected to the Kean College student government. The major topics of discussion at these meetings were the need to become politically conscious and active as Latino students and the unification of all Latinos, since at the time "Latin Unity" was not common among students of different Latino national origins.

At a meeting on November 11, 1975, Founding Father García proposed the idea of founding a fraternity. Having become familiar with the workings of the college administration and student government he recognized that a fraternity could promote Latin unity through brotherhood. He also understood that fraternities were an organizational structure that college administrators acknowledged and one with which they were accustomed. Lambda Theta Phi was founded as a Latin Fraternity, which was specifically stated in its original constitution, making it the first "Latino" fraternity in the United States. 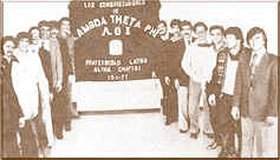